MTI-V 57 Made a Statement in Miami, Just Weeks Ago

The Miami Boat Show is still bringing up conversations among boating enthusiasts about their favorite boats, whether they purchased during the show or not. One hot boat that turned many heads is the MTI-V 57 which was chosen as “Image of the Week” by SpeedOnTheWater.com during the show, back in February. Check out the complete article and featured photo below! 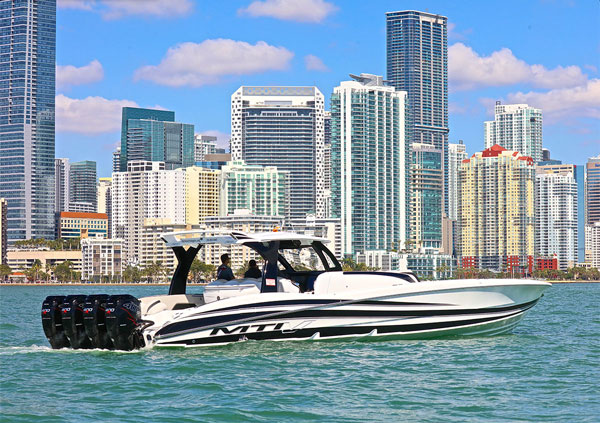 The MTI-V 57 was a major highlight of the 2018 Miami International Boat Show. Photo by Pete Boden/Shoot 2 Thrill Pix

Following a Friday morning test ride in the gigantic 57-foot center console from Marine Technology Inc., TNT Custom Marine’s John Tomlinson idled back into the Miami International Boat Show docks on Virginia Key and slowed up to allow a couple members of the speedonthewater.com team to get a closer look at the downtown Miami skyline.

Although the buildings of all different shapes, sizes and colors are plenty visible from the boat show docks in front of the dilapidated Miami Marine Stadium, the view was a little better from the water and behind the helm of the gorgeous MTI-V 57.

Randy Scism, owner and founder of MTI, was proud to have the new 57-footer, which has a top speed of 67 mph with quad Mercury Racing Verado 400R engines, on display at the boat show along with a trio of beautiful catamarans between 34 and 48 feet and a pair of MTI-V 42 performance center consoles.

“We brought everything from our 34 outboard cat and our 57 V-bottom and everything in between,” Scism said. “Everyone is loving the 57. The reaction so far at the show has been great. We still have a few days to go but if the first day is any indication, I think Miami—like the Fort Lauderdale show a few months ago—is going to be better than last year. Actually it’ll probably be the best show we’ve had in several years.”

Original Article at speedonthewater.com — Image of the Week: MTI-V 57 Makes its Mark in Miami