MTI was featured as a cover story on the latest edition of Speed On the Water Magazine, highlighting the MTI-V 57. While this boat has received a lot of coverage this year for it’s impressive showing at the Miami Boat Show, it was once again mentioned and you will likely see this boat with continued coverage for months to come! Check out the latest feature in the January/February Edition of Speed on The Water which can be downloaded via speedonthewater.com, here.

Over the last seven years, Marine Technology Inc., has repositioned itself as not only a premier builder of high-performance offshore catamarans but also a leader in the luxury performance center console market thanks to its MTI-V 42 model.

From the prototype I had the chance to ride in and drive at the 2012 Lake of the Ozarks Shootout to several other 42-foot MTI models I’ve been aboard at various events, I never imagined that the Wentzville, Mo.-based company would build something that would make the MTI-V 42 look small yet feel like you’re driving a boat that’s not really 15 feet longer than its predecessor.

That’s what happened though and the speedonthewater.com team got to experience it firsthand during the 2018 Miami International Boat Show in February. Test driver John Tomlinson of TNT Custom Marine took the helm and put the 57-footer through the paces by rolling it up on plane with ease and taking it out across a choppy Biscayne Bay and out along Stiltsville, the curious collection of historic hand-built wood stilt houses on the bay.

After getting a feel for the boat since he’d yet to drive one before, Tomlinson didn’t hesitate to carve S-turns like he was driving one of MTI’s 42-footers, and the 57-footer reacted like it was a much smaller boat.

“This thing is nimble—it’s a comfortable cruiser but it gives you that nice, nimble feel when you’re on the wheel,” Tomlinson said. “The acceleration is good with the 400s—the boat doesn’t feel sluggish at all. It gets up and goes pretty well actually. Naturally the hull feels like it could handle much greater speeds.

“What I like most about it, is that we could run over some chop and boat wakes and not feel a thing,” he continued. “Yet, at the same time, we could whip U-turns and figure-eights in the boat like it’s a runabout. The visibility and wind protection are good. So is the instrumentation and placement of the controls and everything else on the dash. It’s well thought out. The joystick piloting also is a nice feature.”

Tomlinson didn’t run the boat for top speed but he did take the 21,000-pound boat past 60 mph with plenty of outboard-engine rpm left.

It’s worth noting that the boat is MTI’s third 57-footer. The first one—a champagne-colored prototype that was built upon request from one of the company’s Middle Eastern clients—was fully open and without a cabin. The second boat—a silver and charcoal beauty that was built as a tender to a super yacht—was featured at the 2017 Miami International Boat Show and powered by quad Seven Marine 627 engines.

Randy Scism, MTI’s owner and founder, said the Seven Marinepowered 57, which reached a top speed of 80-plus mph, is an awfully impressive machine, but he’s equally impressed with the performance of the boat with the 1,600 hp worth of Verado engines as he’s driven the boat up to 67 mph.

“Everyone at the boat show loved the new 57,” Scism said. “The reaction was so positive. It really does drive like a sportboat, it’s doesn’t have that big boat ‘wallow around’ feel to it. It’s still sporty and it runs mid-60s with 400s on it—I think that’s phenomenal for something this size.”

He said the fuel efficiency also is “pretty impressive” for a boat of its size.

Although the MTI-V 57 wasn’t officially sold at the show, Scism thought he had a buyer, and he was right as it landed in the hands of South Carolina’s Todd and Debby Campbell, who planned to run the boat in the MTI Owners Fun Run through the Florida Keys in March.

“The service and overall experience that MTI offers across the board is top-shelf,” said Todd Campbell, who is officially taking delivery of the quad Mercury Racing Verado 400R-powered MTI-V 57 they’ve named Unbridled at the Tickfaw 200 Poker Run in Louisiana in early May. “We weren’t really looking for an MTI—I was in the market for a Hatteras motor yacht. But we knew of MTI and its owner Randy Scism’s reputation through our friend Rich Bennett and when we saw the new 57 my wife fell in love and wanted nothing else. It’s a niece piece of equipment, it’s great looking and I think the power is perfect for the size.” 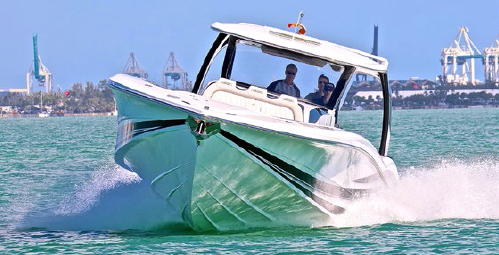 Campbell, who is on the board of directors for the annual Hartwell Lake Poker Run that benefits the local Meals on Wheels services, said the 57-footer is a little large for his hometown lake,
but he will have it there for the poker run in early June. After that, he’s looking forward to running the boat to the Abacos islands in the Bahamas.

Sounds like a perfect place to take the latest MTI-V 57.

Article found in the Jan/Feb 2018 Issue of Speed on the Water Magazine. Story written by Jason Johnson. Photos by Pete Boden.