The Randy Scism Interview with Speed on the Water Magazine 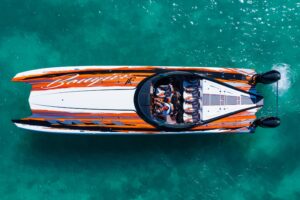 “It’s no big deal—just and you’ll be fine; the thing practically drives itself,” he said with conviction. “You sure?” the rookie Powerboat magazine editor asked as the boat idled away from the docks at the Hyatt in Sarasota, Fla., the home of many Powerboat magazine boat evaluations.

That was my first encounter with Randy Scism, the founder, and owner of Marine Technology Inc.—best known simply as MTI— some 15 years ago. I was rather green when it came to performance boats, especially offshore catamarans like Scism’s Wentzville, Mo.-based company specialized in at the time, and, frankly, I didn’t know anything about him, let alone all he had accomplished to that point in his career.

I had yet to read the Powerboat profile editor at large Matt Trulio had written about Scism in 2004, highlighting his successes with the Dubai- based Victory team on and off the racecourse as well as his rapid rise in the United States performance boat market since founding MTI in 1999.

Click here to read the complete article from Speed on the Water!