MTI Ladies are on the Water Again 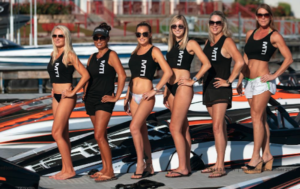 The MTI ladies are on the water again as Yvonne Alderman took her MTI 340X out to participate in a photoshoot with other female power boaters. Taylor Scism, Alderman, and other female powerboaters are featured in the photoshoot and celebrated for paving the way in modern boat racing. Read more below to see what Alderman had to say about this amazing opportunity.

Yvonne Aleman of Fort Lauderdale, FL—the owner of an MTI 340X—remembers how the event began. Aleman had been talking on the phone earlier this year to MTI’s Taylor Scism about how female speed boaters don’t get the recognition they deserve. Aleman is one of the sport’s heavy-hitters, a former Skater owner who has participated in shootouts (she ran the 2016 LOTO edition with Tristan Collins Garvin) and drives her MTI Mad Props with her partner/boyfriend, Greg Harris, on the sticks. “There are really very few women operators in the sport, and as one of them, I think it sucks that we don’t get recognized. Most of the recognition goes to the hottest girl in a bikini.” Once behind the wheel, Aleman says she doesn’t get out even to pick up a poker card.

The conversation struck a nerve with Scism, who contacted Aleman shortly afterward to pitch an idea for a special photo shoot prior to the 2020 edition of LOTO that would pay tribute to the go-fast women in speedboating. “I said great, but if this is a bikini shoot, I’m not interested. I’ll run my boat—that’s what I’ll do.” Scism assured Aleman it would be a “very classy, very elegant” shoot to heighten awareness of women who drive their own boats. “I’m in,” Aleman said.

And so, immediately prior to the big events surrounding the 2020 Shootout, Taylor invited some other female MTI owners and drivers to gather for the collaborative Speedboat Magazine photo shoot. “I started calling around, and got really great feedback—everyone was super excited,” Scism says. “We were able to do it early in the week, before things got too busy.”

“It was a really fun event,” says Scism. “Everyone was very excited to do it. We started by actually spending an hour or two on the docks, just getting everything ready and grabbing some breakfast. Then we got going later in the morning and had a great time. Each of us ran individually down the lake being chased by the helicopter. Then we all formed a V-shape and ran down the lake together and got some group photos.”

Aleman was delighted with the results of the shoot. “Everybody did a phenomenal job,” she says, “and it was very interesting to get the feedback afterward. We got an abundance of support, including from our own friends—people were saying, ‘My wife wants to do this’ and ‘My girlfriend wants to do this.’ This is precisely the response I was counting on. There is no bigger bonding experience than running a boat; the level of trust that goes into it is like nothing else.”